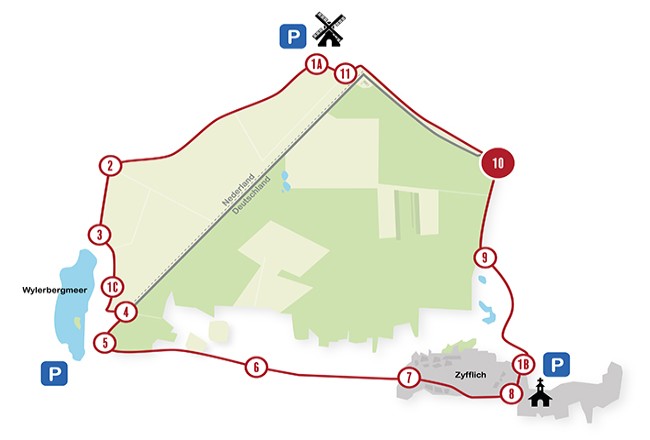 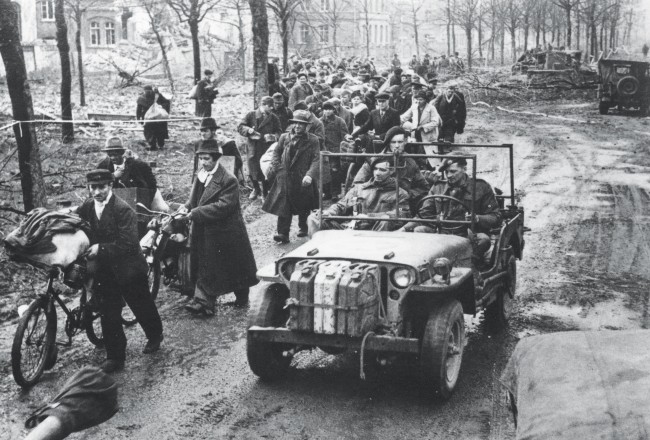 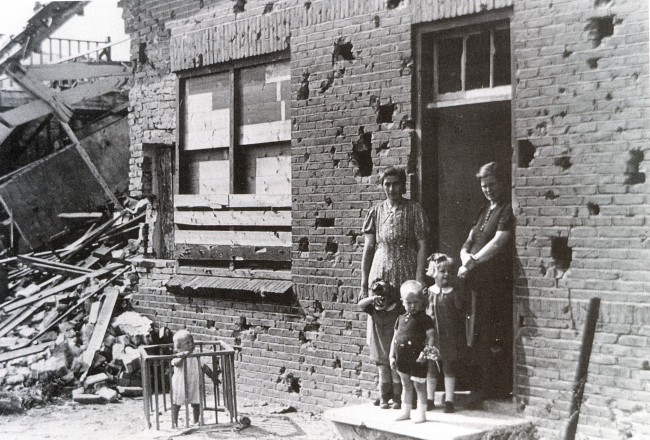 After their evacuation, most people returned between April and June 1945. The locations where they were housed in the previous months stretched from the Achterhoek to Groningen and Friesland. The first people to return were those who were able to help with reconstructing the village, clearing war material and bodies of the fallen.

Many houses were damaged so badly that they were no longer habitable. Those that were still habitable, were often shared by several families.

Below you’ll find part of a story of an, at the time, 11 year old girl

Return to home in Leuth.

We’re going home, everyone together on a flat cart with whatever was left of clothes and food. With a five-month-old baby and a billy goat that kept the child and everyone awake. That was a horrible thing, he knocked us upside down every time. If we had to fix him to a pole somewhere so he could graze, before you knew it you would be lying upside down on the ground.

When we got home, our house was still there, but it was a big mess. Our coconut mats were, as we only found out later, in another house. When we left, my mother still had string beans, sauerkraut and endive in pots in the cellar, as well as preserving bottles with cherries and beans, etcetera. But the soldiers, or someone else, had pulled open the bottles and threw them over the preserving pots with sauerkraut, string beans and endive. So everything was spoiled.

Life was tough. Homes destroyed, food supplies gone or spoiled, cattle dead or taken away elsewhere. In fact, a shortage of everything. The Gelderlander newspaper wrote the following about it in an article on the 24th of October 1946:

Then people returned to Leuth, which they left behind as a front village, but where they still expected to find something of value. Many were deprived of that illusion upon their return. That what had survived the violence of war had been lost through robbery and inundation.

The ruins of houses no longer offered any protection against the elements. In and around the houses there was a chaos of destroyed household contents and spoiled food. And that was how they found their place of residence. However, as in all of the war-torn areas, the residents of Leuth did not give up that easily. Feeling tough and grim, everyone returned to work with the determination to make the village habitable again in the shortest possible time. Besides that, they also wanted the place to arise from its rubble and ruins by making it even cleaner and more prosperous than before.

As a government agency, The Central Bureau for War Victims (1944) was responsible for the "financial and social assistance" to war victims. In 1945, the War Victims and Evacuation Affairs Department was added, which focused on assistance with evacuation and return of evacuees, as well as the Red Cross Aid Department (HARK). The HARK’s aid also consisted of collections of all kinds of goods such as furniture, shoes, clothing, etc. Popularly, the abbreviation HARK was also translated as Help to Rich Acquaintances. There were, rightly or wrongly, doubts about how fairly the collected goods were distributed.

Below a written request for help in the book "The municipality of Ubbergen in the front line".

“Bring cots and mattresses, bring tables and chairs, bring stoves and kitchen utensils, bring blankets and clothes and underwear, in short, bring everything you may and may not be able miss, for the people of Leuth are in great misery and are dependent on your help”.